The pumpkins you find on these pages were either done by Rich & Flo Newman (aka TagYerit) or sent in by friends & contributors. There are easily more than 10 pages by now, so give  yourself plenty of time to explore the vast range of wonderful creations assembled here!

We were asked to create a pumpkin centerpiece for  friends who had met while teaching English in Shenyang China. As you can see, we went all out. Flo's only regret was there wasn't time to include the Great Wall as well. 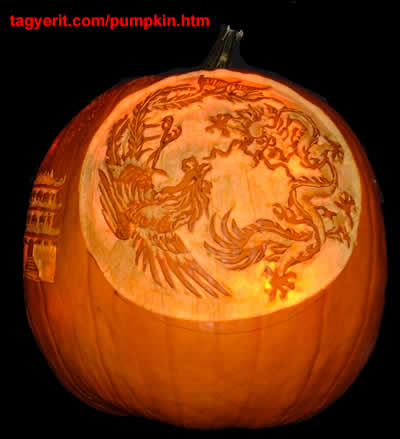 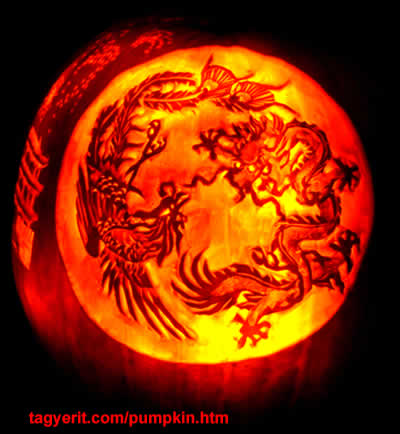 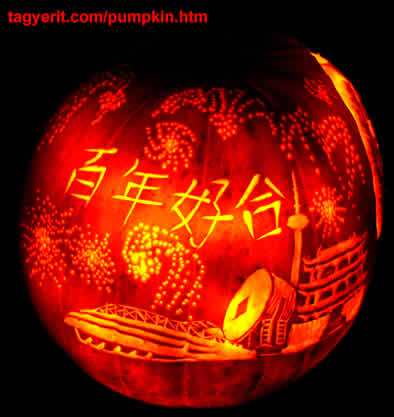 Finally Chinese Fireworks fill the sky on this joyous occasion. 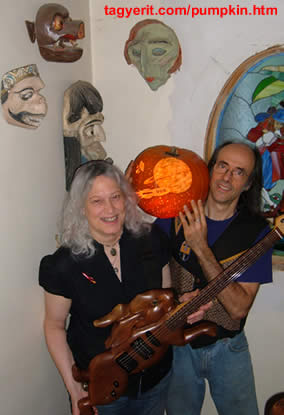 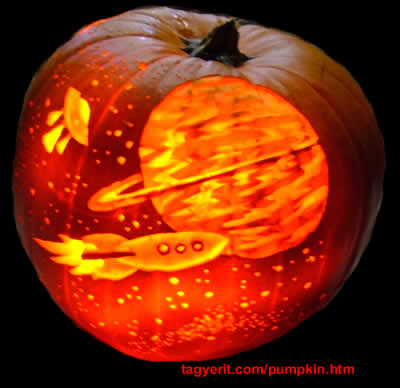 We needed a TagYerit band promo pic for a press release for our Halloween song "Trick or Treat Trials". Flo decided to carve this Sci Fi pumpkin for the shot.

This pumpkin was inspired by the movie choreography by Busby Berkeley; Flo Ziegfield's Follies, as well as the June Taylor Dancers on the Jackie Gleason Show. We carved this for our niece who loves Dance. We also wanted to create a design that uses the shape and lines of the pumpkin itself. Six different levels or depths of carving were used to capture the  various shades of light and color. 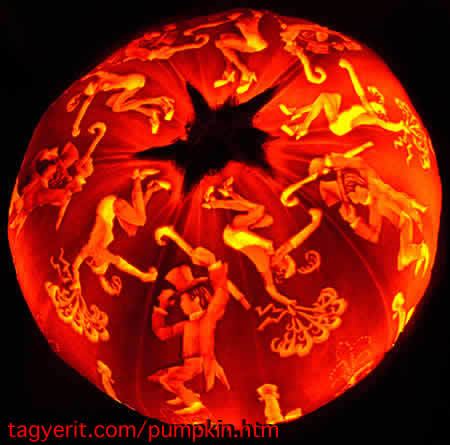 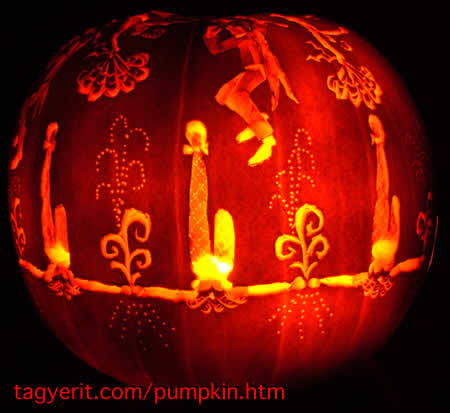 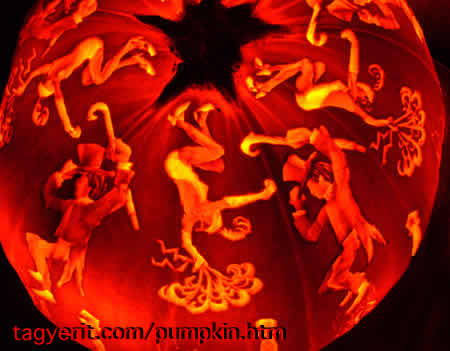 Haven't thought of the right title for it ... some contenders are "So you think you can carve", "America's Best Dance Pumpkin (crew)", "Gotta Dance Kin" ...

Our Tai Chi center was celebrating its 11th anniversary and Flo & Rich carved this pumpkin with 2 images for the party. The lotus is the logo for our school The International Center for Harmony (classes in Springfield, MA). On their web page you can also see Shifu (the master) in the "dan bian" position. 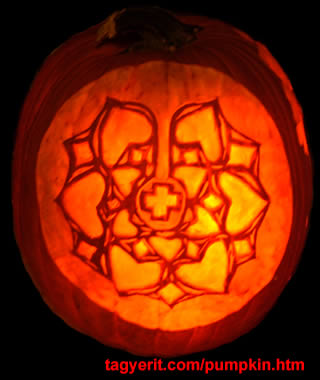 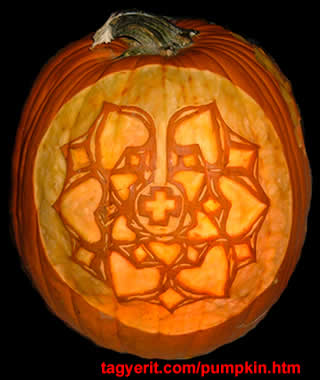 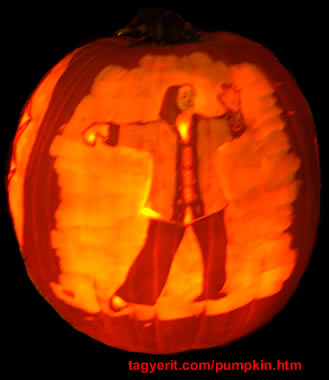 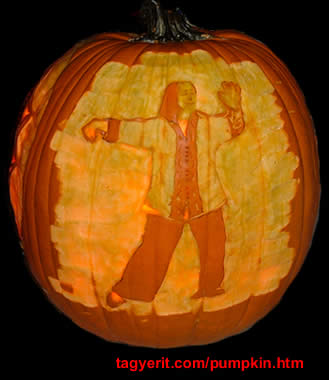 Don Witt has been carving pumpkins at "BOO at the Zoo" in Akron, OH for the past 18 years. He uses helpers so he has time to be for the more creative and  difficult designs. He makes all the patterns himself which sometimes takes longer than the actual carving. This year is his first at sculpting. and his second year sharing some of his wonderful designs with us. See also 2009 and the pumpkins at his website (you can also find out more about Don and his techniques and inspirations by reading his book at his site. He shows quite a breadth of ideas from We The People to the hypnotic Tunnel of   Love.  He has carved a lot more for 2010, we are just showing a sampling (believe it or not) 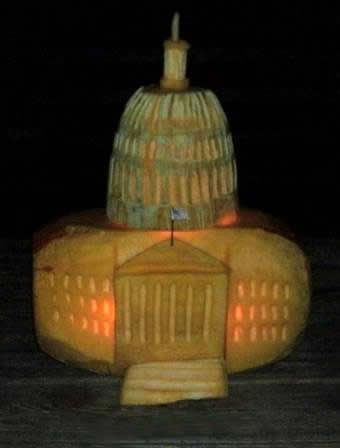 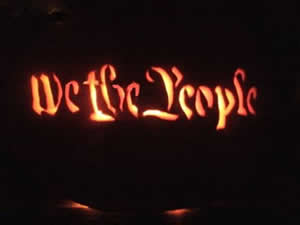 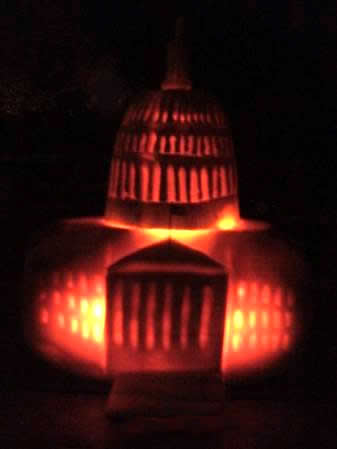 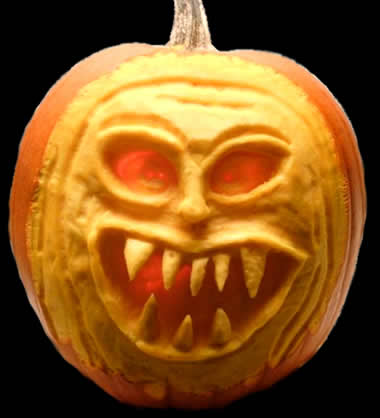 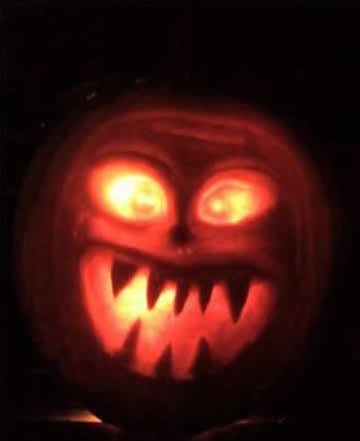 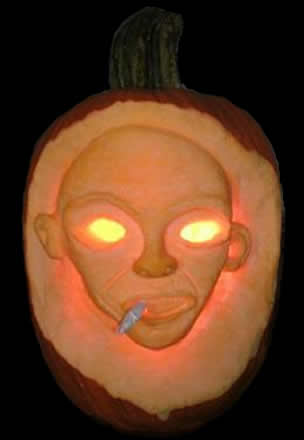 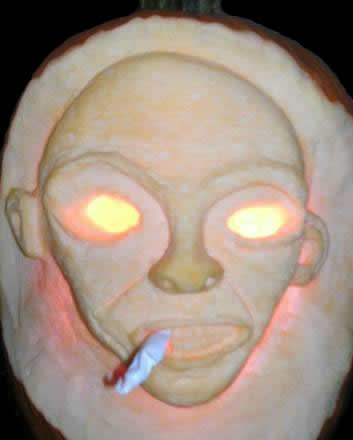 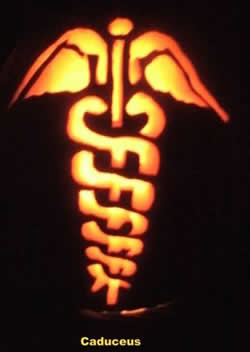 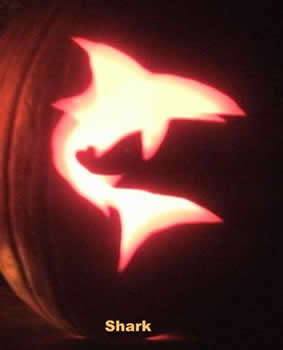 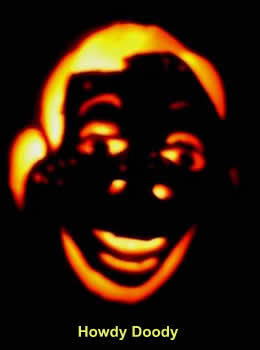 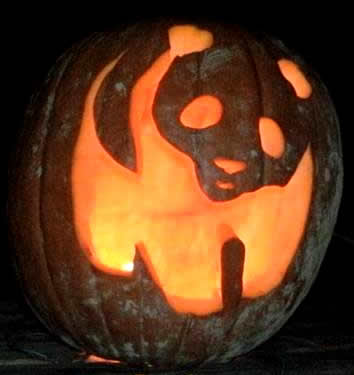 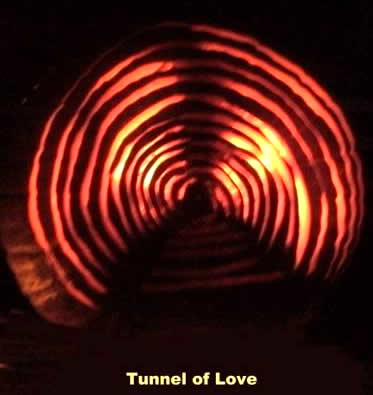 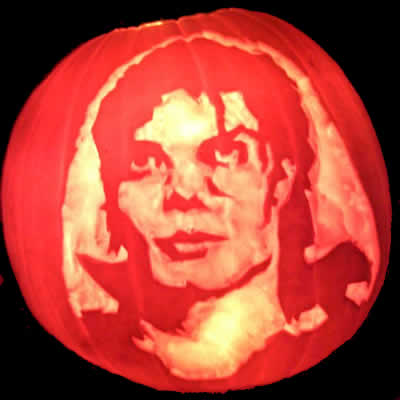 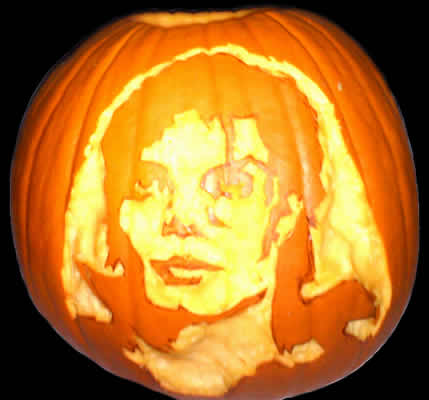 Clinton is a 26 year old musician who loves art. "This is actually only the 3rd pumpkin I've carved but I've always enjoyed working with new media to create art.
I did hollow it out but a candle wouldn't suffice - I guess theres a certain etching technique to getting the layers thin enough for a candlelight to penetrate, but I had to stick a lamp inside for it to shine through."

Once again Rick Chong with the help of his daughter carved a pile of pumpkins. You can see these and others up close at .tagyerit.com/pumpkin_tips.htm

Linda Fehr  used a design from the cover of  Southern Living magazine as inspiration for her leafy pumpkins. She decided to skip hollowing the pumpkins in the hope that they might last longer this way.

She also carried out an experiment. After she finished carving, she soaked the larger pumpkin in some bleach water but not the small one.  She reported back two weeks later. "The pumpkin that I put in water and bleach did much better than the one I didn't. The smaller one started getting moldy. I had them both in the refrigerator for a while because the weather. Got them out last week since it's cooler now. The bleached one still looks good." On Dec. 11, Linda reported in, "Just to let you know my pumpkin still looks good! I dipped it 2 different times in bleach water. It's setting in my garage now and will probably freeze one of these days" 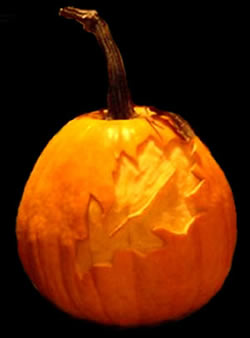 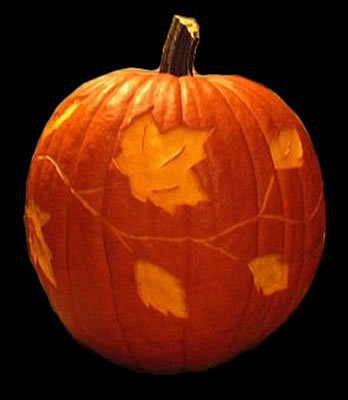