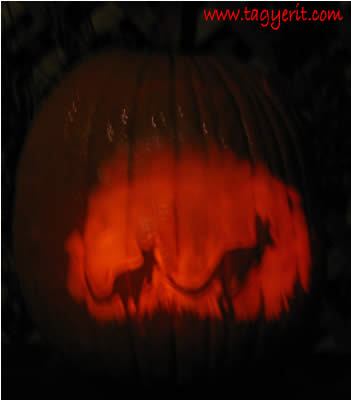 We were looking to carve a kangaroo themed pumpkin.
An online search brought us to http://www.bergoiata.org/fe/animaux02/10.htm
which was such a great photograph and here's the result -

We made this for Dahlia to celebrate her first birthday. She lives in Massachusetts but has already been to Australia and there's a great photo of her mom and her in front of a kanga-mom and her little roo.

So, it was ten days after Halloween and we still had one pumpkin uncarved. Finally found a few hours. As you'll see below Lee Ellis had sent in her pictures of Smeagol, but I had been contemplating a different treatment of Gollum complete with Mt. Doom on the back and using the color of the light for the lava flowing.. So  here is "Gollum's Moment of Truth" 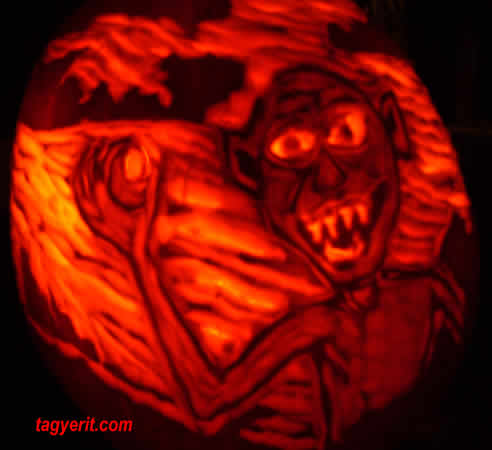 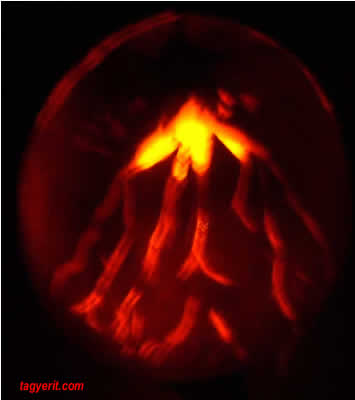 Lee Ellis sent these pictures Smeagol (a.k.a. Gollum) took her 4 hours from start to finish. She provided pictures of the unlit pumpkins, so you can see how it was done. Essentially the design you carve is a like a negative. The areas that are black in the unlit pumpkin are white in the lit pumpkins, the areas that are uncarved come out black and the orange aeas have the skin peeled and some of the pumpkin flesh cut away to allow some light through. 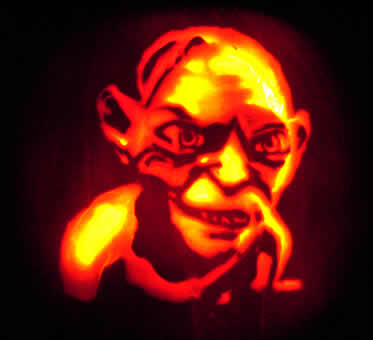 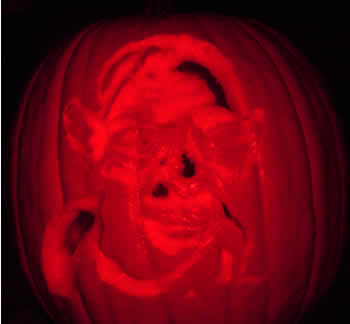 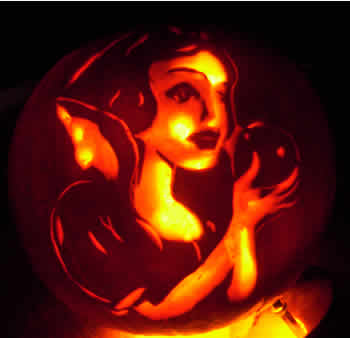 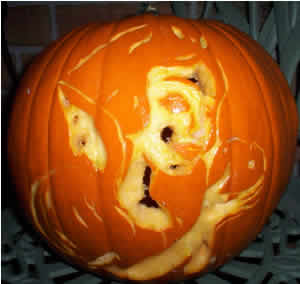 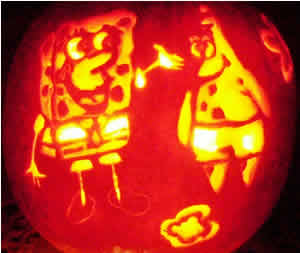 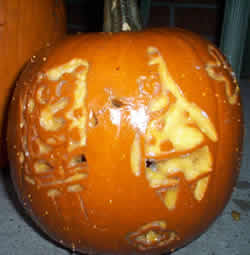 Snoopy rests atop the Great Pumpkin 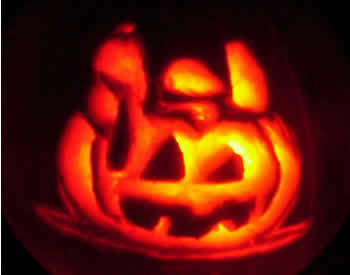 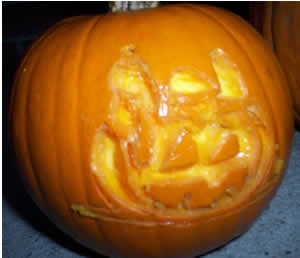 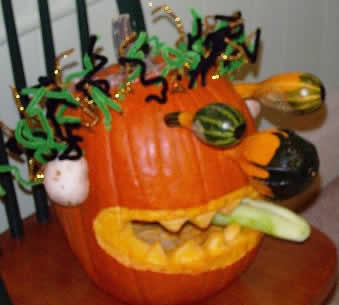 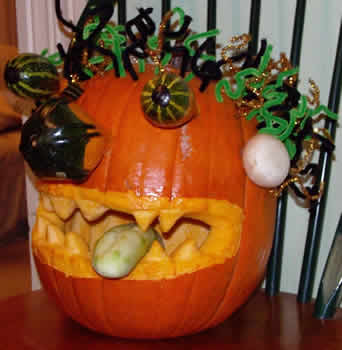 Tiffany Lane sent in pictures of this colorful guy.  "We did an awesome pumpkin for a contest at my daughter\'s middle school, adapted from an idea we found on your site. and then put a multi-color light in the top (not shown). The produce guy at the grocery store suggested the ears!! We used a skinned cucumber for the tongue...not sure if it is better with or without..." 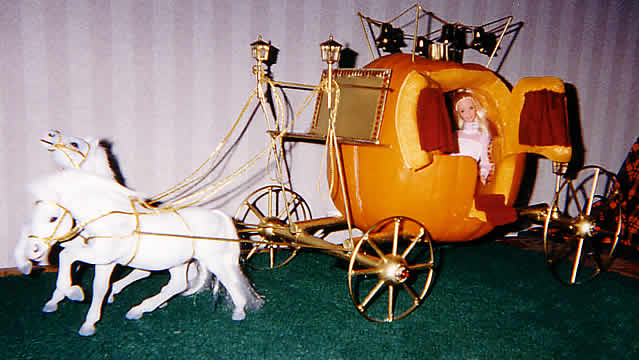 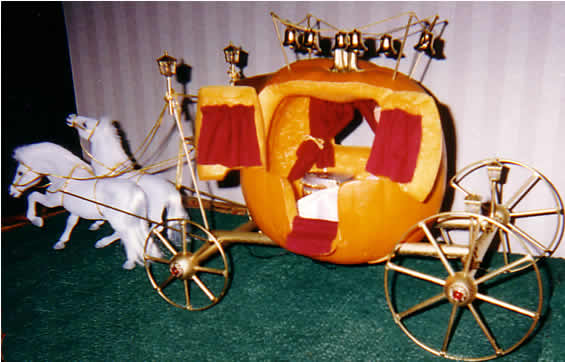 Lisa Luera is a recent convert to pumpkin carving. But she's obviously working hard to make up for lost time. Within 3 years she has probably carved over 50 pumpkins. Here's three of her originals. Click here to see more 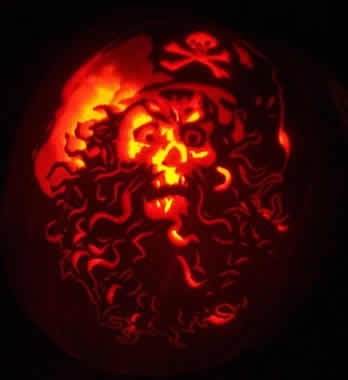 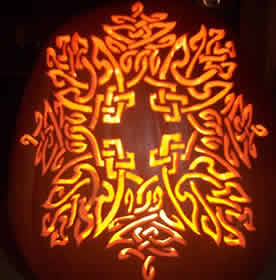 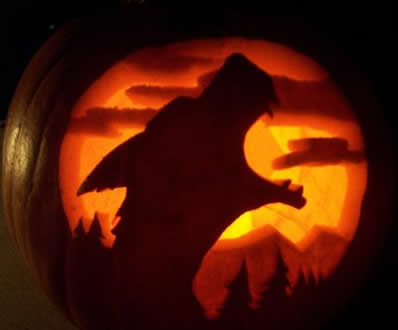 When I asked Lisa to tell me about her pumpkins, there was no holding her back, "Unfortunately I can't take the credit for most of the amazing designs! I just happen to be the addicted pumpkin carver. I have gotten patterns from most of the popular pumpkin sites out there. The Pumpkin Wizard's site is where I got started ... My original carvings are patterns that I have created from pictures I found on the net. I'm still getting the hang of that down. ... So many cool designs, so little time to carve! My originals were Curly Beard Pirate, both celtic knots, Moonlight Owl, Howling, The Smurfs, InuYasha, Happy Thanksgiving, and Turkey Hunt.
I began my pumpkin carving "addiction" in 2003. My office had a pumpkin carving contest, and my competitive side kicked in. I started searching the net for ideas, or for intricate designs that I could carve. I had done a few jack-o-lanterns in years past, but never anything really difficult. That's when I stumbled across the Pumpkin Wizard's site. I carved Haunted House, Cauldron Witch and Dr. Evil for the contest. For the carving category of the competition, Haunted House won 1st place, the witch 2nd place, and the Dr. Evil got 4th place. The Haunted House also got grand prize.
That's when the addiction really set in. I had so much fun carving for the contest, but then halloween was over and I had just found a really cool new hobby. So I asked all of my family and friends if they had any left over pumpkins at their house. That's when I carved Tigger and all of the Thanksgiving pumpkins.
So in 2003 I carved 9 designs on 7 pumpkins. In 2004, my husband and I bought our first house. That's when I started planning for my first display. I had 21 pumpkins on display that year (One of them was a giant 3 ft pumpkin). I taught my mom how to carve that year.... she had 2 in the display. I carved more earlier in the month that didn't make the display. I also held workshops at my office and my mom's office and taught several other people how to carve. 2004 was also the year I bought myself a dremel and started carving on the foam pumpkins.
In 2005, I started carving the foam pumpkins in early August. This allowed me to have more in my display without having to cram all the carving in the last week of October. I had 37 pumpkins on display with 43 patterns on them. 20 of the pumpkins were real (another giant one thrown in this year) and the rest were artficial. All of them were carved this year with the exception of one. I was hired by Michael's Arts and Crafts store to do in store demonstrations and teach carving classes as well. So I carved several pumpkins during the season for demos that didn't make it to the Halloween display.
As far as preserving my pumpkins, the best way I have found is to put them in a grocery bag and stick them in a fridge. I actually did an experiment on one of my demo pumpkins. I stuck it in the fridge and would pull it out every saturday and display it while I was carving a new one. The pumpkin actually lasted 3 weeks and still looked as good as the day I carved it. I finally threw it away because I had a more intricate design I wanted to keep for the Halloween display and was out of room in the fridge. I started carving for my display about a week and a half in advance. By the time Halloween rolled around, I ended up with 7 pumpkins in my fridge, 5 in my Mom's fridge, and 6 floating in cool water in my bathtub. The rest of them that didn't get a fridge or tub spot were carved on the night before or the actual day. They don't last long out of the fridge. Especially in our Texas sun. I decided to photograph the pumpkins this year as they wilted. (none of them molded... just dried out). It only took 48 hours before most of them were unrecognizable. Then we had a smashing pumpkins party that involved me smashing them on the ground and my husband cutting them up with a shovel so we could get them all to fit in our trash bin. Click here for pictures of "The Aftermath". 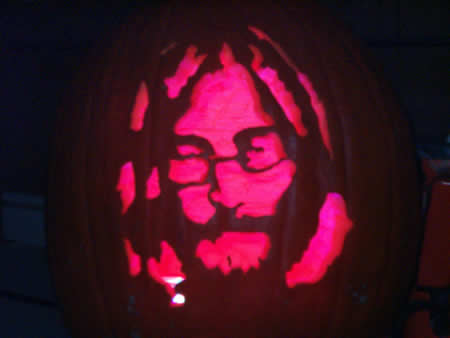 Brian Gilroy sent us this portrait of John Lennon. This is Brian's first pumpkin made from a stencil that he got off the web. He tells us, he's now addicted and going to try to come up with us his own stencils.

The next pic is how it looks unlit. 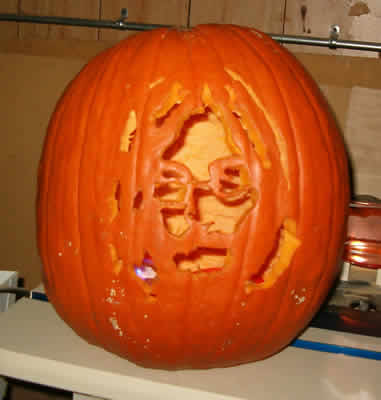 I have never worked this way, but Brian was asking for suggestions on making his own stencils. No guarantees, but to make your own stencil, try the following tutorial along with some additional tweaking.

My guess is that you'll have to tweak it from there to get thicker lines. If you cut & paste the stencil over itself and slightly offset a few times it might work. Thicken the lines and then experiment with simplifying them. I'm not sure, since I never tried it, but that's how I'd approach it if I were to try.
The tutorial is for photoshop, but any good graphic programs should be set up to do the same thing. 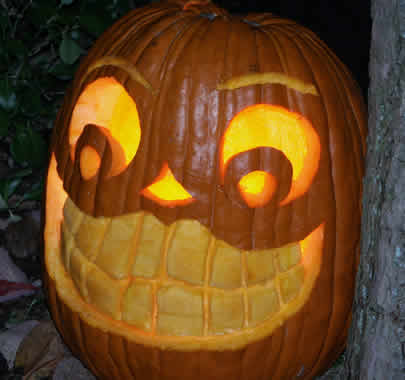 This cheery guy is a creation of Bill Woodier. You can read Bill's Halloween memoirs at his website.
Or, if you'd like to start by reading about his interest in pumpkin carving, then go here first: http://www.bill-woodier.com/halloween5.htm.

The examples of his pumpkin carvings, including this beauty, can be found starting at
http://www.bill-woodier.com/halloween2002.htm