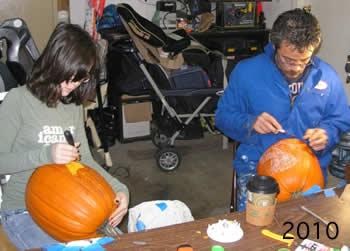 Rick Chong has shared some of his creations on this website since 2004. He lives in Vancouver BC and began carving in 2000. Every year he has carved a portrait pumpkin of his daughter Ashleigh and over the years she has learned how to carve pumpkins also and is now his carving partner.

"Many carvings are done from a pattern, some I do from a coloring book pic and the ones of my daughter are done from photos. I always do pumpkins the little ones will recognize, after all Halloween is all about the kids!!

"When I use a coloring book I try and decide on ones I know the colors of. For example.. Shaggy I know has light brown hair and fair skin tone. So between the face and hair I leave skin on to separate. So basically all the lines on the coloring book pic is left as pumpkin skin. The mouth... when people open their mouths it's dark so that's how I knew to leave it dark (skin still on). A good tip for all fellow carvers is once you have your pic use fabric transfer paper to get the pic onto pumpkin. Tape the transfer paper to kin and then tape pic to transfer paper and go over all the lines with a pen, blunt instrument or whatever. Peel the paper off and voila. I like to use a dark color transfer paper such as blue. I only like cutting right thru for the white of the eyes and teeth. Like the effect better when there is less area that I cut right thru."
"My daughter for example has dark hair so I peel a thin line on the outside border so it highlights it."

You can read an article about Rick & Ashleigh for 2012 here. 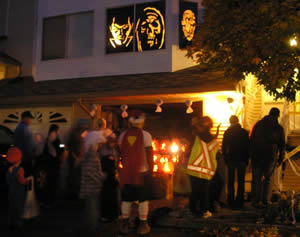 He sets the pumpkins up in his garage and gets quite an appreciative audience. 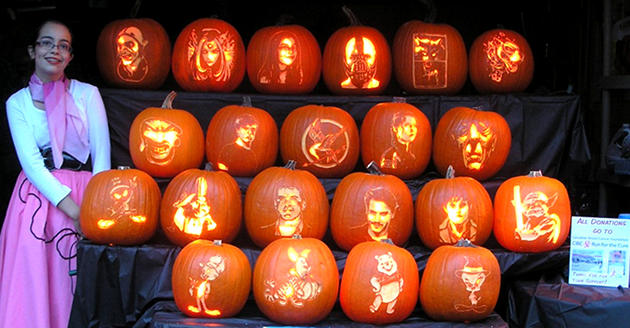 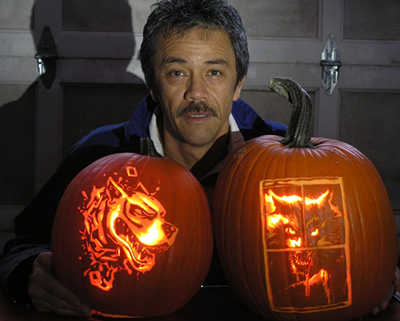 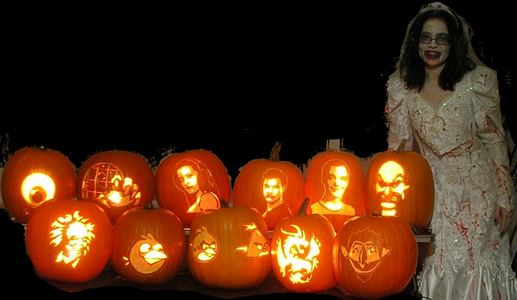 Ashleigh with her share of the pumpkins: Cyclops; "Not Too Close"; Bella, Jacob & Sheldon from Twilight; Scary Clown; Beetlejuice; Several Angry Birds; A Dragon & The Count 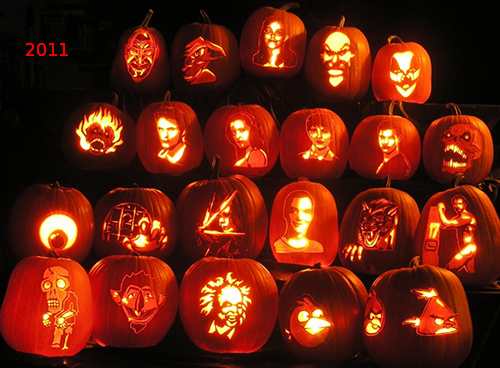 Among the other luminaries that Rick carved are: his annual daughter portrait; various classic Halloween figures (clown, goblin. skulls, werewolf, zombi...); Edward Scissorhands; Michael Jackson (carved after Halloween with a leftover pumpkin AND Ryan Kesler from the Vancouver Canucks who had been photographed nude for ESPN magazine. Several of the patterns are from stoneykins.com & zombiepumpkins.com 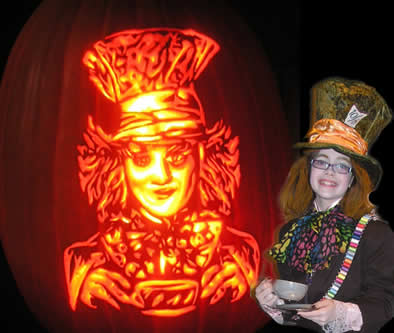 PUMPKIN - It's what's for breakfast: Here are The Lucky Charms Elf, Tony The Tiger, Toucan and Sugar Bear.

Rick carved many of these pumpkins, but his daughter Ashleigh carved the pink panther, pepe lepew, yoshi, sonic the hedgehog, and once again "he who shall not be named. (the middle 5 in the top row) 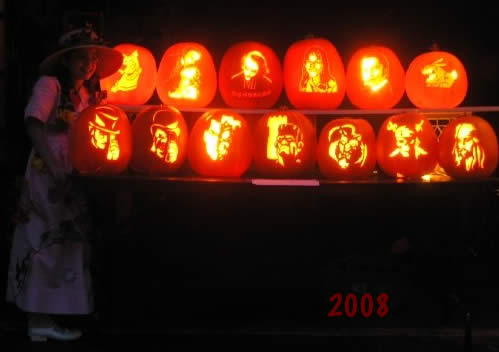 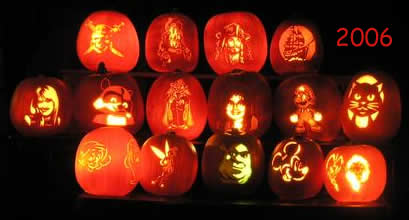 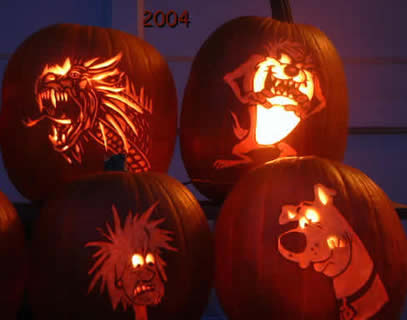 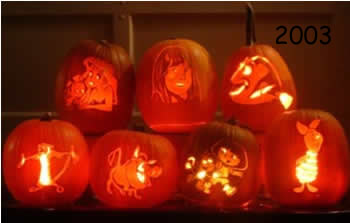 Pirates of the Carribean 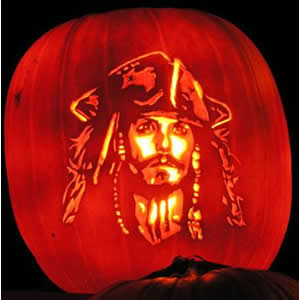 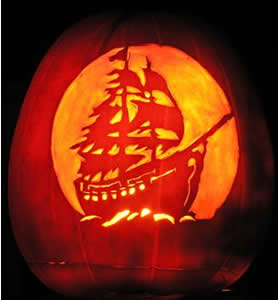 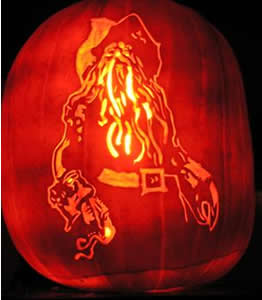 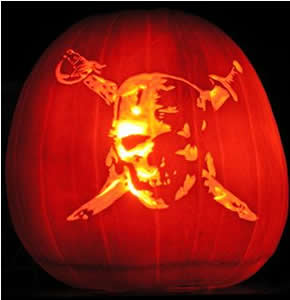 Rick's Window Treatments: They are made with black felt and tissue paper. 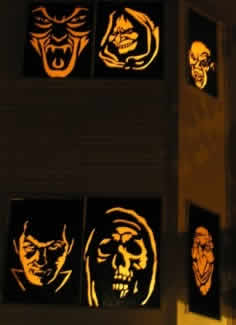 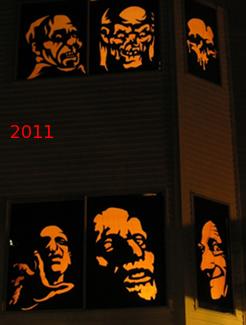 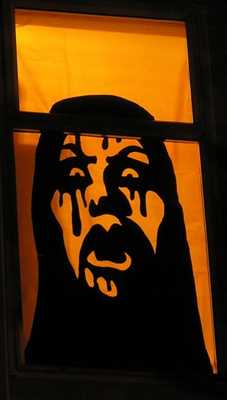 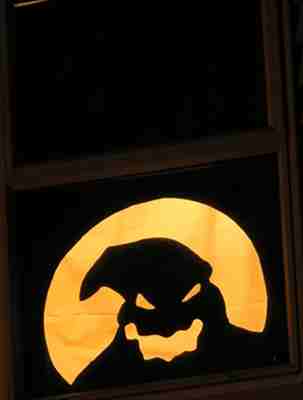 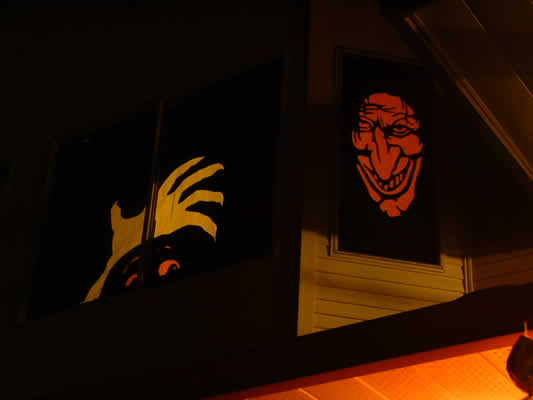 The pumpkins you find on these pages were either done by Rich & Flo Newman (aka TagYerit) or sent in by friends & contributors. There are more than 10 pages, so give yourself plenty of time to explore the vast range of wonderful creations assembled here!  Keep going, there's so much to see!