Costume pictures of Halloween, Mardi Gras, New Years and other Costume Parties. Many are from our own events, but we'd love to add your pictures of homemade costumes as well.

Our friend Prince (not the artist once again known as Prince) created this wonderful Creature from insulation foam. It evolved over 3 years, which explains the various forms you see it in. One time, the update was so fresh that he left some foam stuck to one of our walls. Definitely gets the prize for the most elaborate time consuming creation. 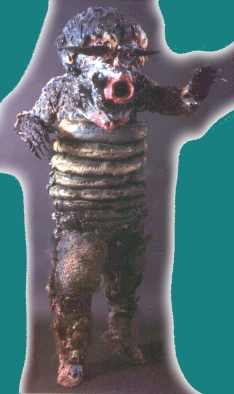 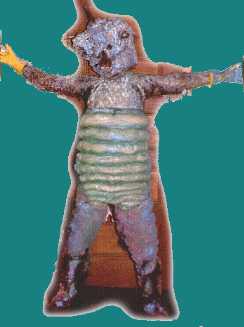 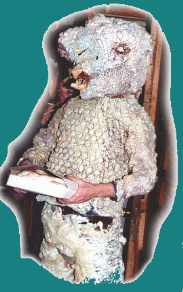 The Fairy Flush in her Toilet Paper Wedding Dress 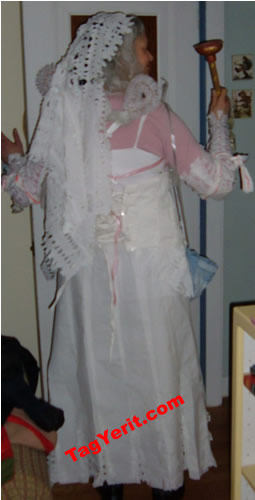 The Beat Poet, The Intergallactic Tourist and The Construction Worker

Growing or attaching a beard or mustache can add just the right touch ...

Three masks made at the copy center, though they could have been made on a scanner.

Sometimes, it's all about the jacket. ...

Or the hat: in this case it's a stealth bomber

p.s. Foot wear can be important too. Here we found the appropriate outfits to go with the floor tile

There have been failures too! Guess what you  think these 3 costumes represent?

Ready? From left to right.

It depends on where and when you were born, but the first costume that Rich remembers wearing in 1956 was an Elvis costume with a small plastic
guitar. I doubt I knew who Elvis was, but I remember asking my mother what I did to "be Elvis" and she said, "Just sing You Aint Nothing but a Hound Dog". Perhaps that sealed my fate to be a guitarist, though I didn't have my first real guitar until I was 9 or 10.
Flo's fate (read "love for Halloween) however was sealed the moment she was born on October 31 in Salem, The Witch City. When you share your
birthday with a trick-or-treat candy collecting holiday, not to mention a sweet tooth, well you're bound to write a song like this.