A Window on Boston's Music Scene

HOW TO GET YOUR MUSIC IN FILM & ON TV
Dave Gibbs - Gigolo Aunts - band member and songwriter: "Our publisher at Polygram likes us and our music. On spec, he asked us to write a song for That Thing You Do, about a Pennsylvania one-hit wonder in 1964. We had to imagine what that band would be writing about, and not writing about. He called us on Thursday, we wrote it that night and mailed it by Saturday. They didn't use that song, but they did use several of our other songs. ... Publishing has kept my bills paid for 6 or 7 years.."

Barbara Jordan - Heavy Hitters - Music publisher (including Party of Five, Jackie Brown) She specialises in film and tv placement. - based in Boston. Had been a songwriter: "I couldn't keep up with the demand in film. I have to be in L.A. 4 or 5 times a year. A publisher will try to work every connection possible. You have to have someone who is always watching all of the changes. I worked hard at getting the title spot on Melrose Place for one of my writers. From that, the writer was able to get instrument sponsors and the interest of A&R. That writer has been working the industry for 10 years, and couldn't get anywhere. Understanding licensing is important for negotiating. If you have a pre-existing hit, you can ask what you want. Make sure when you do your masters, you own the rights to them. "

Tracy McNight - Good Machine Music - film and soundtrack consultant. Looking for new artists. Credits include The Ice Storms, Sense & Sensibility, Brother's MacMillan: "Read the production lists in the Hollywood Reporter and others ... The music supervisor's job is to find collectively the best music for the film. I'm currently working on 3 films. You have to work with the music director. Find out "What is the direction of the film?" Dealing with source music, licensing, going to the band ... after that the sound track comes in. ... a big differentiation between studio films and independents. At studios, such as Sony, music from the Sony catalog will have a much better chance. ... (What payments can writers expect?) It depends case by case. Sometimes, it's not for the money but for the exposure. The whole budget for Reservoir Dogs was only $2 million. Register your music with one of the 3 licensing agencies ASCAP, BMI, or SESAC. For film and tv you need 2 licenses. A master license (license from the owner of the recording masters) and a synchronization license. One of the interesting things about synchronization license is that the artist has the right to decline.Some artists, such as Alanis Morisset and Neil Young, won't let their music be used on film. "

Bernie Wallace - composer - Originally a jazz sax player: "By a bizarre accident, I ended up making sound for films. I found myself doing stuff I never dreamed of, including Blaze, White Men Can't Jump, Bull Durham. I was recording at Blue Note, when Bull Durham was looking through their catalog for music. Their entire music budget was $40,000. They asked me to write an end-title . I recorded it with the Little Feat rhythm section and Dr. John.. Then they asked me to compose the score for their next film.
Writing for film is mathematics. Precisely fitting music to emotional moments. At a spotting session with the producer and director, watching the screening, they stop the film at certain emotional moments and spell out where the music comes in, or changes. It is most important to let the director know you don't talk musical talk, but you use emotional talk. Make music that's emotionally honest."

Steven Hill - MTV - among a team of people that selects videos. Worked 5 years as a dj in Boston at WILD. "Music video is just the opposite of film. The visual is made to match the music. Don't go for a big budget. Keep it smart and you can make it cheaper. It's not about how much money you spend.... Getting your music on a movie helps you get on MTV. "
Steven cannot take submissions. For MTV submissions, contact Fred Johnson.

Publishing is the gift that keeps on giving.

First things to know to get in to radio ...

What types of source material to send... Most Outrageous things to get notice? What tools do you use? 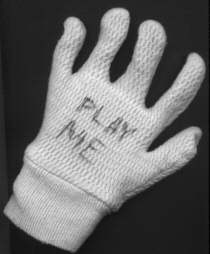 A few of the highlights ... a few comments

In a box with about 50 submissions was the glove that said "Play Me". And sure enough it was first to get played. "At Peace" is a demo tape by Krista Marie Cilfone (New Platz, NY). accoustic guitar "nice voice, nice song, a good contemporary folk vibe."

a CD single by My Favorite Relative. Started with an old scratchy LP sound, evolved into a very cool modern rock feel. "good pop song ... like the Beatles ... a bit of Roller Skate Skinny or Master Monkey"

Seandomonium (Sean Altman) Wild stuff! The track they excerpted was all vocal including the percussion sounds. "pretty insane ... great and unique ... a good song ... Squeeze & Moxy Fruvous ... The technique can give writers something to talk about (building 'the story')"

Baby Ray - With the bass carrying the melody line and the two guitars strumming the alternate beats which are separated on the tracks, this song got an applause from everyone in the room. "almost sounded like 2 things going on at once ... brilliant... nod to early XTC ... a well fleshed out song ... eccentric"

Of all the demo sessions I've been to, the music at this one was incredibly & consistently good. This speaks well for the maturity of the Boston based music scene. (Or was it just dumb luck?) If this reflects a trend, it's pretty exciting. I'll have to wait until 1999 to see.
As we were cleaning up, I discovered that many of the bands never picked up their CDs and cassettes from the session. I grabbed a bunch of them just as the hotel staff was about to dump them. I've only had a chance to briefly skim them, but the following 5 grabbed my attention for further enjoyment.

As Flo & I sat on the Riverside trolley and reflected on the NeMo event, I spotted a teenager listening to his Sony Discman and reading the liner notes on his CD. I mentioned to Flo that I had the urge to walk up to him and hand him TagYerit's CD and flyer just to see what would happen. But I was too tired to dig to the bottom of the bag. A little while later, we noticed 2 teenage girls sharing ear plugs while listening to a tape. They were really enjoying the experience of sharing their reactions to the music. This time, it was too hard to resist. Flo grabbed a flyer and dug out a tape. She walked over to the girls, intruded on their party long enough to hand them the tape, pointing out her rabbit-shaped guitar, and before they knew what had hit them, she had returned to her seat. They immediately put our tape in and grinned as "Subway Surfing" started. Unrolling our 12 page j-card and our paper-airplane flyer they were like kids in an ear-candy store. They asked us, "Is this really you?" and said they really really liked it. Meanwhile the lady sitting next to me asked us what we had just given the girls and the next thing you know TagYerit's Subway Surfers had given out another tape. She was on the way to the hospital to visit her newborn niece. They all got a rush out of receiving the gift of music.
Who knows, the next time we're on the subway we might strike again. We'll know you by your headphones.

Or Head over to

We want to hear from you Email rich@ tagyerit.com