Click here to hear TagYerit's song SciFi (first half) in RealAudio while you enjoy some wonderful pumpkin art.

In 2002, Judy Summers was the first to send us a painted pumpkin, "Jack". Painting is not something that Flo or I have done (other than my Pumpkin Head Astaire mask). Had it not been for the unbelievably precocious painted Beings that Judy has created with pumpkins and paint, we might never have started our painted pumpkin gallery. 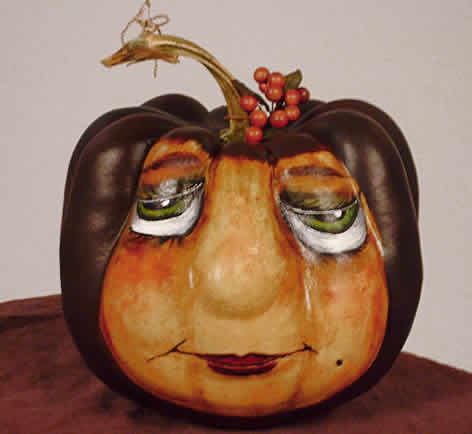 Here is Bette Davis Buckeye. Bette is quite a do-gooder. She raised $1200 in a raffle Oct. 2003 and the money went to a little boy with a rare genetic disease. Good work Bette (and Judy). 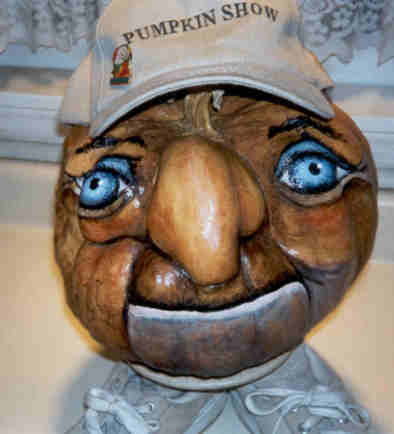 Jack was painted in 2002, but that's not what's different. His shape is what's different. He was born this way. Judy Summers found him at the farm and immediately adopted him. Judy painted him with acrylic and sprayed with an acrylic glaze. And Jack, her first pumpkin was featured in  a 2007 a issue of Birds and Blooms Extra!

You never know what kind of party will be happening in Judy's refrigerator. Here are a few of the reveller's in 2002 ... 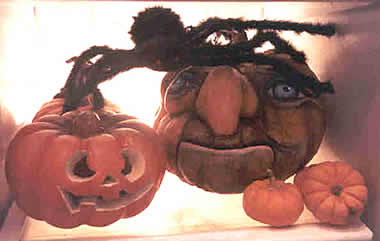 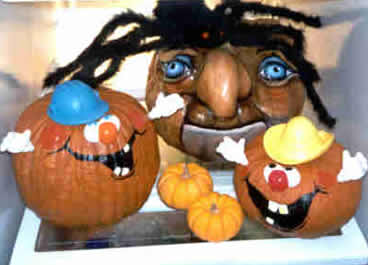 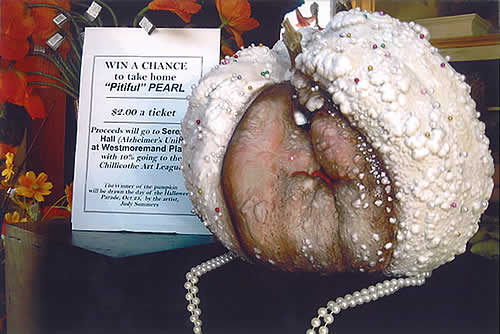 They each have been displayed at the Circleville Pumpkin Show, (the biggest free show in the US), for a week before they returned to Chillicothe, Ohio where they were auctioned off for a good cause? Pitiful Pearl here shows how it's done. No Halloween would be complete without Blooberry the Fairy Godmother, Roger the Chocolate Moose, Tootsie, Rocky or Morty the Mixed Nut. 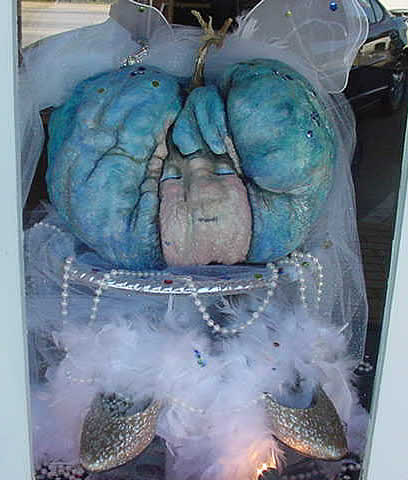 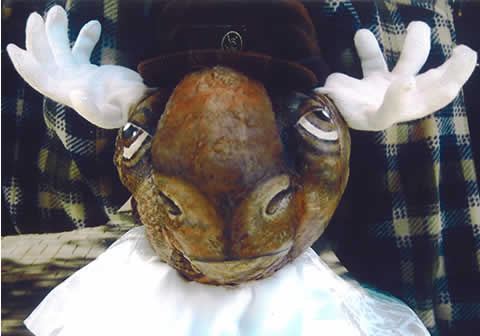 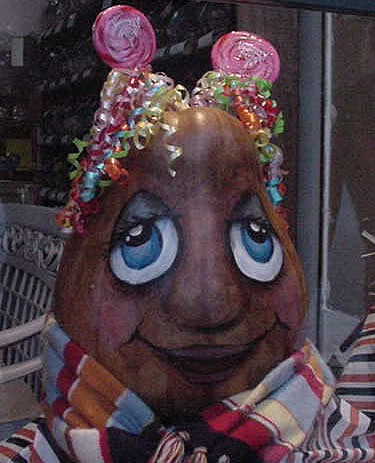 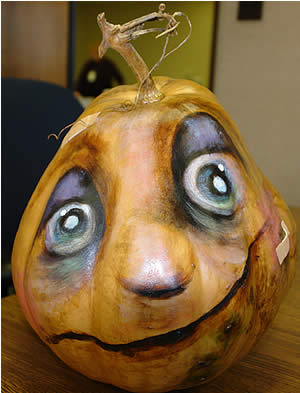 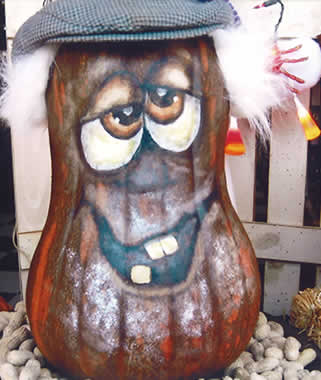 Here's Judy's pumpkins for 2009 ... The white tiger is named "GGGRRRalph". The one with the orange hat is, "Popcorn Polly" and the pumpkin settled in at the piano is, "Play it again STAN, not Sam". All three are different varieties of pumpkins. 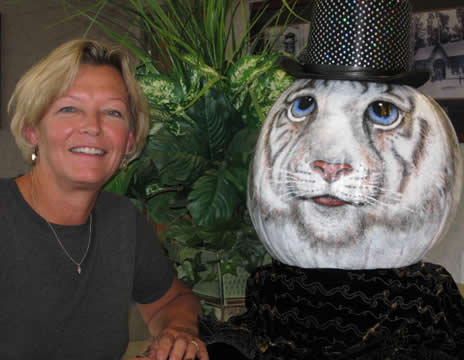 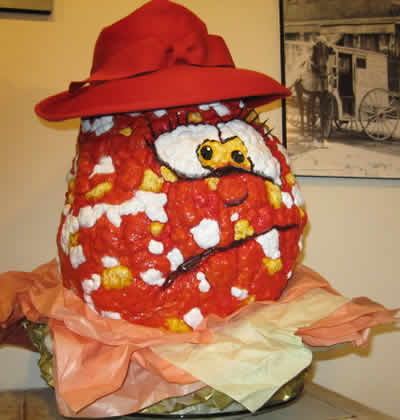 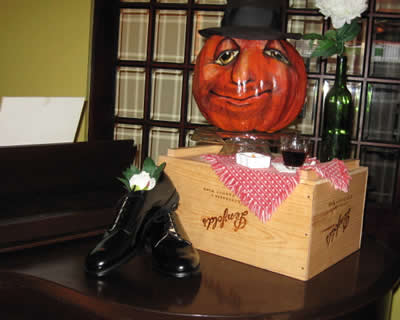 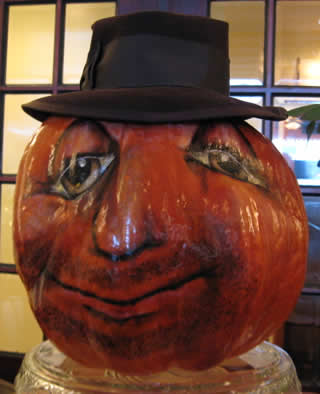 2015 Judy sent in these wonderful pumpkins. Once again they have been auctioned off for charity. 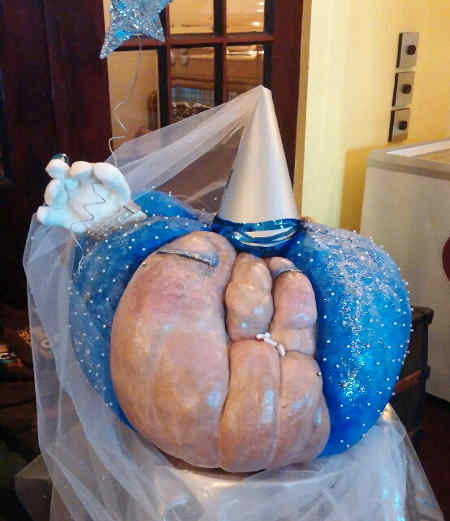 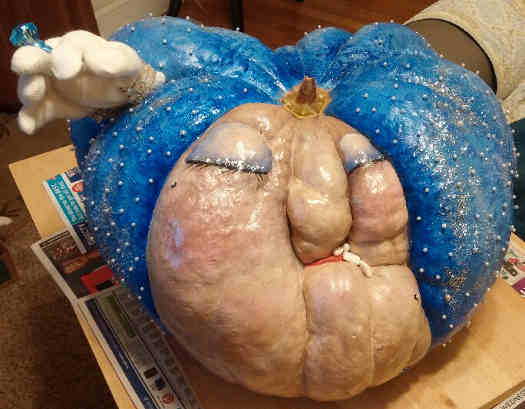 The Tooth Fairy is to be in a silent auction and the proceeds go to their Art League. 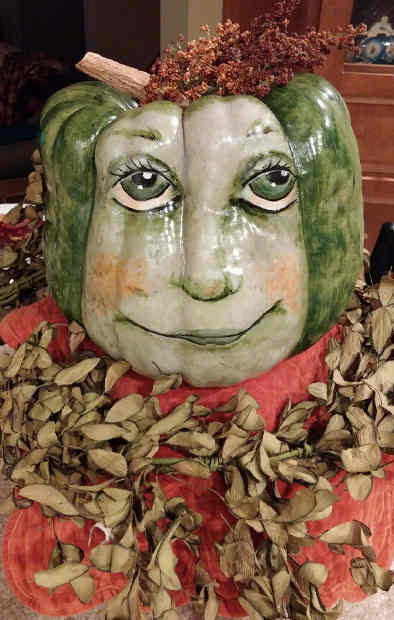 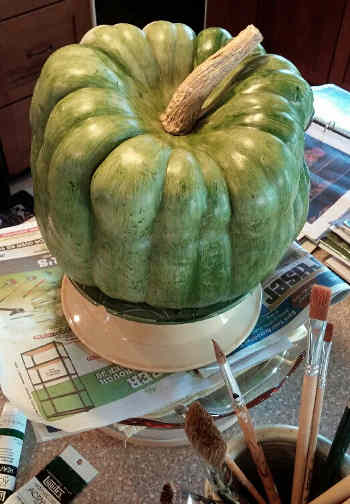 "I'm a Pepper." The proceeds for her went to the United Way. 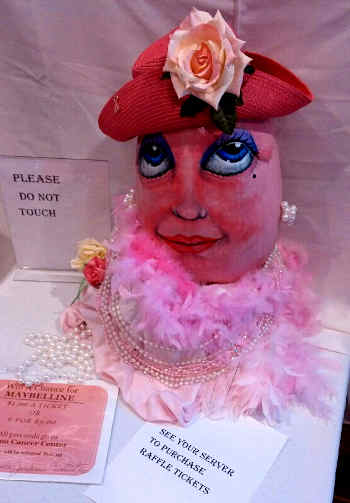 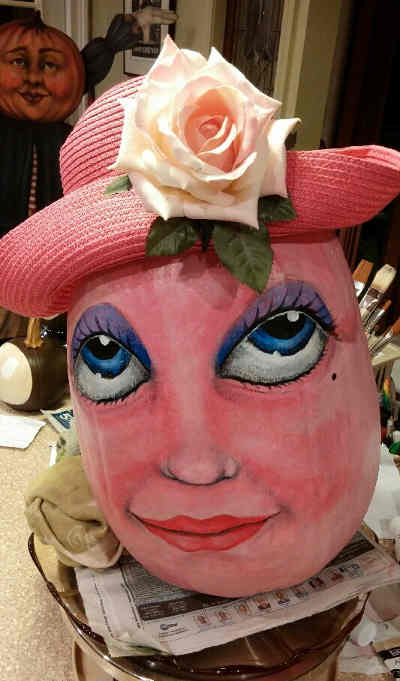 Now if you're from Ohio, you'll probably recognize Brutus Buckeye, the mascot for OSU, the rest of us have to look it up. But here's Brutus doing his part by raising money for breast cancer research. 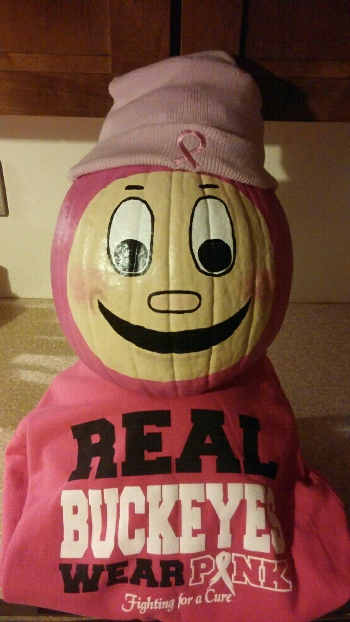 Also for what appears to be a very busy year for Judy are Kandy and Half Popped Pete. 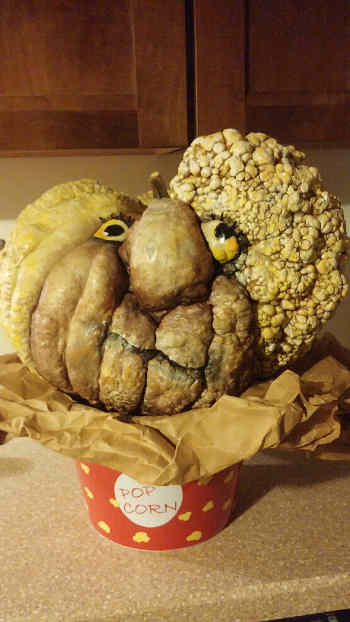 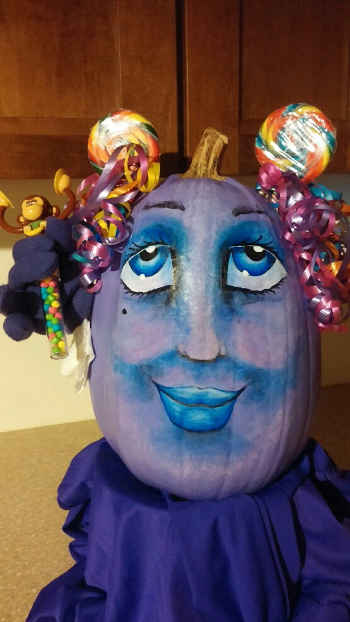 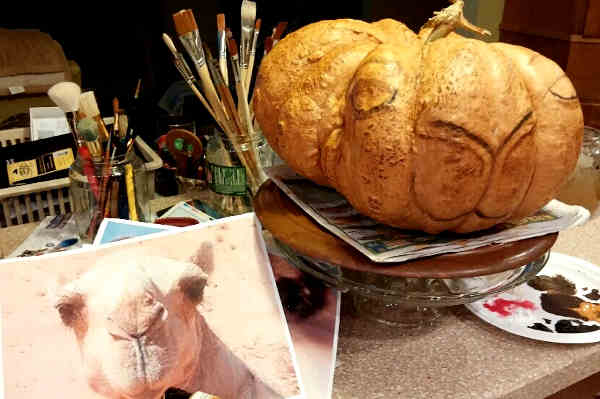 The camel was never completed but it clearly illustrates Judy's process.

2016 Judy painted Deputy Dawg and Malcolm the Monkey charitable causes and Sour Grapes Gracie was in a show. Malcolm was painted to look like one of the Wizard of Oz’s flying monkeys. (actually reminded me of the character Finley in the Disney prequel Oz the Great and Powerful (2013) 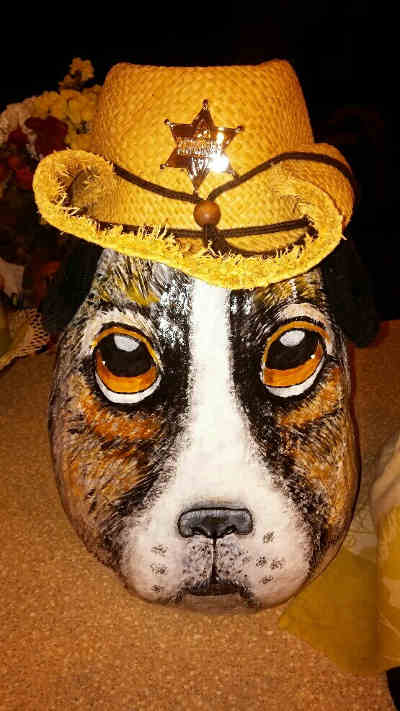 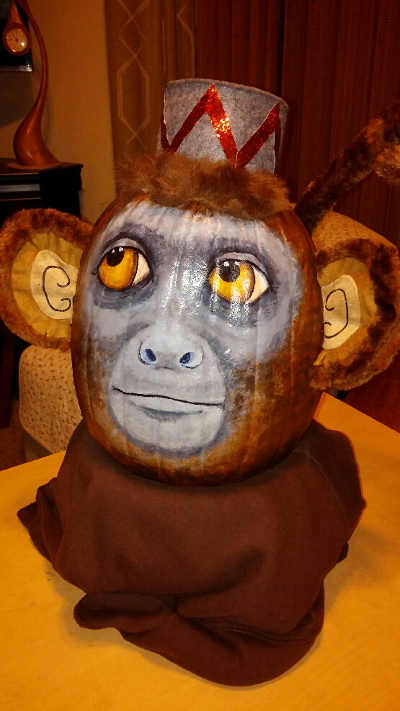 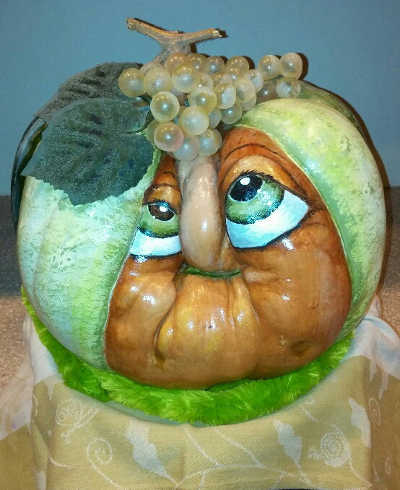 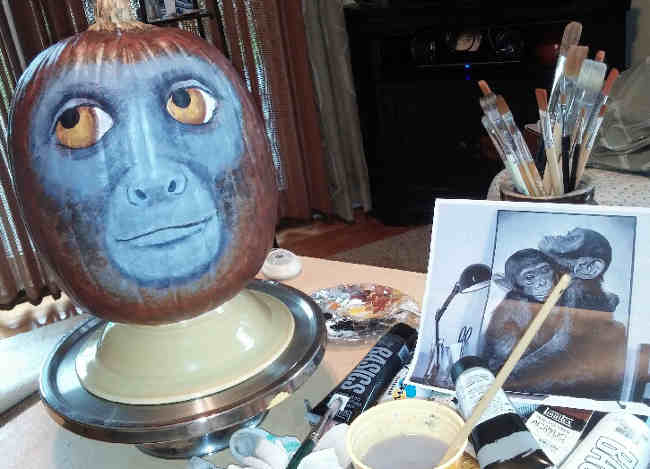 2017 Every year Judy has her doubts on gaining inspiration, but once she gets started, you'll agree her imagination takes off. Here's Wilted Rose and The Queen of Hearts. Both were donated to good causes. 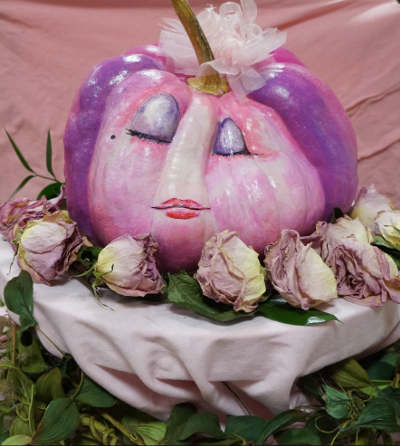 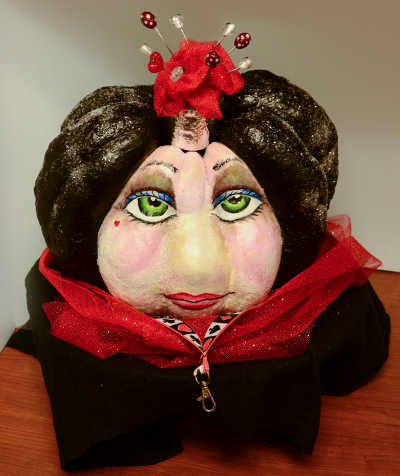 For more painted pumpkins (if you haven't already seen them) - GO TO Painted Pumpkins - otherwise look below for other great options.

The pumpkins you find on these pages were either done by Rich & Flo Newman (aka TagYerit) or sent in by friends & contributors. There are many pages, so give yourself plenty of time to explore the vast range of wonderful creations assembled here!  Keep going, there's so much to see!

To contact us please type in the email address shown in this image.

After our website moved, I gave up trying to get the forms working again. - Whether you'd like to say hi; make a request or a suggestion; discuss the use of any of these images; swap links; we'd love to hear from you!

All text and images ©1998 - 2022 Rich & Flo Newman
(Any images credited to others remain their property and appear here by permission.)